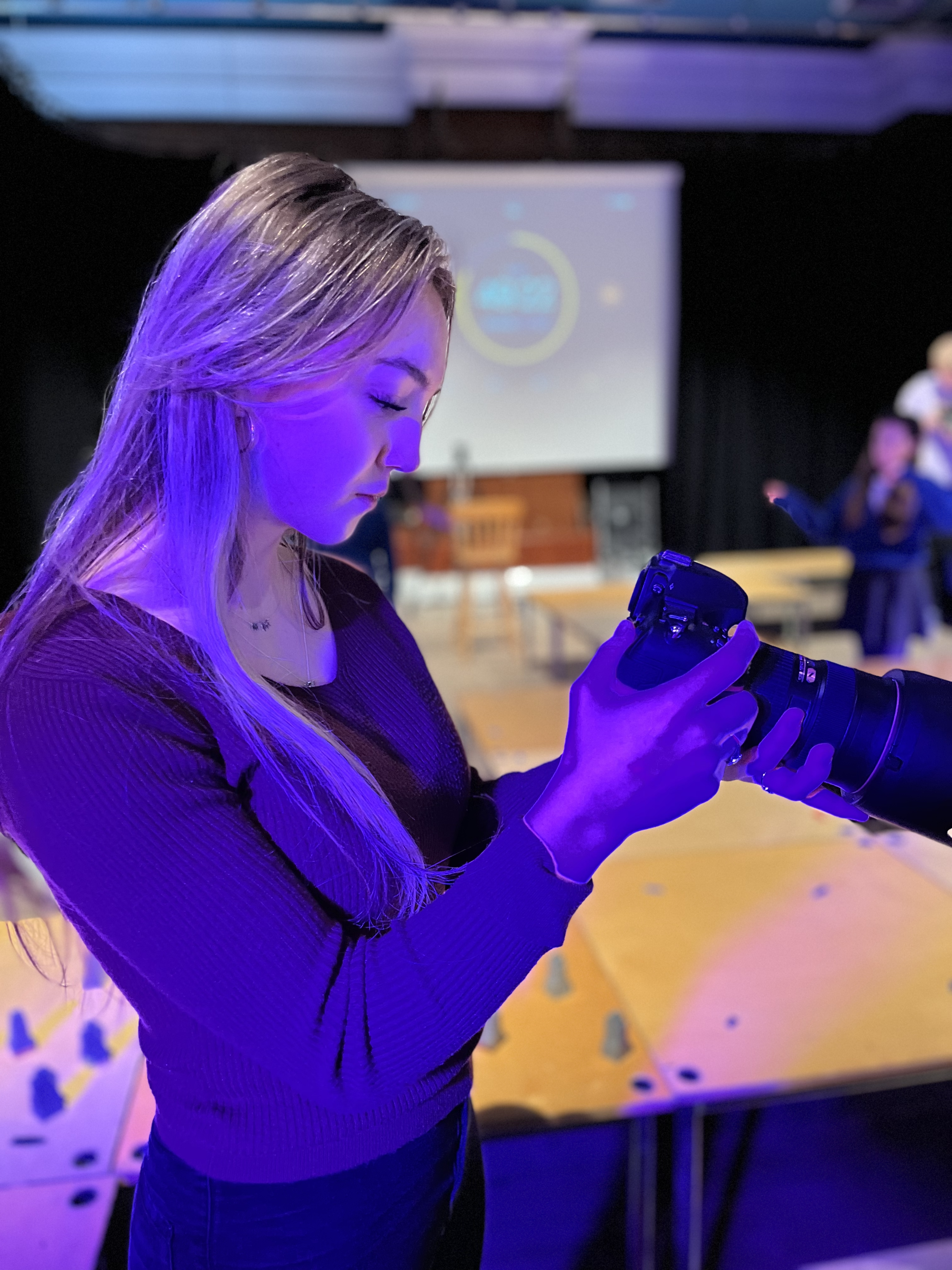 Categories:Uncategorized
by Shannon Barrow |
on February 11, 2022

From 7th-11th February we had 3 work experience students join us from Cromwell Community College. They had requested an immersive experience in filmmaking and media. Here’s Lauren’s blog captured through the week regarding her experience:

On Monday we arrived at 9 am, we had a meeting where we were introduced to everyone at 20Twenty and introduced ourselves. In the meeting, we spoke about what each of their jobs is and the tasks they are currently doing. We then spoke about what we wanted to gain from our experience here and discussed the areas we would most like to focus on. We were then told what we would be doing throughout the week. For the first part of the day, we were given extensive training on Adobe Premiere Pro where we followed along with a step-by-step guide on how to edit and put together a video. Through this, I can now confidently say I understand how to use Premiere Pro in a much greater depth than before. After this, we had a zoom call to discuss the plans for Wednesday for the lego Robot Wars event, at the town hall. Next, we were each given a job in preparation for Wednesday. I was put on social media, Sam and Shira were put in charge of photography and videography.  After lunch we took part in a team-building exercise where we brainstormed ideas for a storyboard for the video ‘Pathways and doors’, this was a short film the team was asked to make about educating and encouraging parents and students in Fenland on the pros of further education. Towards the end of the day, we went to Neale-Wade to overlook a media class, overseeing this lesson helped to prepare me for the next day where we would be taught a similar thing.

On day two we arrived at 9 am and began by refreshing our memories on the lesson we were given prior to the day before. After this, we started to write our blogs on yesterday’s experiences, to sum up, our Monday. Next, we were shown how to take apart and reassemble a camera. We were then shown how to use it and the different modes/settings were explained. After this, we were given time to practice using the cameras ourselves. When our colleague Tom came at 11:30 am, he gave us a lesson on how to use Adobe Illustrator. We were given an in-depth lesson as a group, where Tom patiently talked us through the software and helped us as we went along. Through this, we practiced making our own logos, which I broadly benefited from as I can now create logos and illustrations myself. After lunch, we were then given substantial tips on photography, having a hands-on go at taking photos ourselves. We then uploaded some of the photos we took onto the MacBooks and had a practice-orientated go at editing them. After this, we then went back and had once again expanded on our skills creating designs on adobe illustrator. To finish off day 2 we ended it with a video called ‘Meeting Walt’ and a video on product photography. Through today I have gained confidence in how to use Adobe illustrator and am much more comfortable when it comes to making my own logos.

On the third day, we went to Robot wars at the March Town Hall, this was an exciting event 20Twenty had planned for the year 5 primary children, where they were given the opportunity to compete in a series of challenges. They built robots out of lego in their groups, this was a fantastic team-building exercise where we saw the children working hard together. The prize for the winning team the children would be gifted a day out to Harry Potter World, this encouraged the children to work to the best of their abilities. Seeing the excitement of the prize winners was one of my favourite parts of the day. We took videos and pictures of all the children taking part. Shira and I took turns taking images and posting on social media. Overall it was a fun day being around all the children, it was nice to see them all so excited and we even took part in attempting to build a robot ourselves. I felt we learned a lot today as we got comfortable using the camera equipment and got in plenty of practice taking photos making me much more confident in my photography skills. For me, the best part of the day was the final round of Robot wars where we got to see the winning group celebrate their victory. After we were all packed away we continued to add to our blogs and went through the photos and footage we took throughout the day.

On the 4th day, we were appointed the task to create a short video using the footage taken at Robot Wars. I was asked to put together a 30-second clip for the social media pages using Adobe Premiere Pro. Because of this exercise, I was given more practice to grow on my editing skills, allowing me to further my understanding and get more accustomed to the application. To close out the day, we continued to work on our blogs.

On our last day, we attended a meeting regarding the marketing plan for Neurons, I felt I learned a lot from this, through seeing the 20Twenty teams’ use of strategy and hearing their ideas. Through my time at 20Twenty, I have gained confidence and learned new skills when it comes to using applications such as Premiere Pro and Illustrator. I enjoyed my experience In the 20Twenty work environment and feel I have largely benefited when it comes to expanding my knowledge and practical skills on camera equipment. I have learned a lot during my time here and am grateful for the opportunity and experience, I had lots of fun, thank you 20Twenty!

Skills I have learned through my time at 20Twenty:

I have been pushed out of my comfort zone, my experience here has encouraged me and extremely boosted my confidence when it comes to trying new things. I am now willing to take part in other workshops and opportunities when it comes to Media Studies, which is something I would never have considered doing before my time here. I have made a tremendous amount of progress on both my knowledge and practical skills using camera equipment, I was taught about the different settings and tips and tricks on how to get better outcomes with recording as well as photography. The 20Twenty team has given me a vast amount of experience in the areas I most wanted to focus on, I gained essential skills to develop my future career in media.